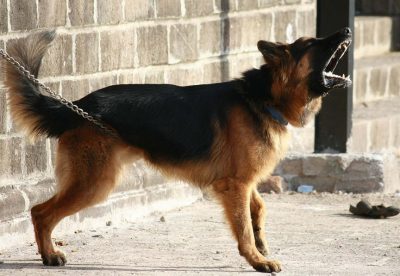 GUARD DOGS – A BIT OF A MIXED BAG

Alright, I know that most of you that are reading this probably already love dogs, are biased, and will defend their effectiveness to your grave.  So, I’m going to throw you a bone.  I think that dogs CAN be effective deterrents to criminals.  On the other hand, I’m going to tell you why they aren’t fool proof.

Don’t have false illusions the the effectiveness of your dog as a home security solution (AKA guard dog).

After all, their effectiveness can be a mixed bag.  I picked this up in just a few minutes of reading “Ask me anything” (AMA) posts from former burglars.  In response to a question about how a person could keep their things secure, he responded,

Get a dog. Houses with dogs don’t get robbed. Dogs are loud, hard to spot, and bite. Doesn’t have to be an attack dog – just a barking dog. Thieves would rather save the hassle and hit the next house.

On the other hand, the next AMA with a thief said just the opposite,

I am amazingly good with dogs and have never had a problem with them making noise. Professional guard dogs are a problem, and I’ve never had to deal with them. If I had to, I suppose it would be to have a mild tranquilizer mixed into some steak to throw over the fence. It would depend on the situation I think.

And, then he further clarified later by saying,

I only encountered a couple barking dogs so far. I’m good with animals and know how to approach them. I’ve only had one dog not calm down after a minute. In that case I just grabbed what I could in a minute and walked out.

Here’s the link if you want to read it for yourself.  So, what should we think with this conflicting information?

One of the best questions may be, is this your dog

or is this your dog.  To summarize if you didn’t watch the video, all 5 of the dogs failed to stop an intruder and most either licked or played with the guy when he broke into the home.  In summary, the average dog makes a lousy security system.  They need to be trained specifically for that purpose and even then, they may be circumvented with some pretty obvious techniques depending on their training.

FIRST, LET’S DISPENSE WITH SOME MISCONCEPTIONS

Let’s go through the arguments you may think of to support the effectiveness of a dog.

An alarm that goes off all the time (false alarms) is useless, because you will turn it off so that it doesn’t drive you crazy.  A dog that barks all the time is just as useless.  It’s worse than an alarm system, because you can’t turn it off.  And, it’s just as ineffective because you and your neighbors won’t pay any attention to it because it always barks.

If a person your dog doesn’t know approaches you on your lawn, how does your dog react?  If she doesn’t bark and otherwise show some discomfort until getting a signal from you that it’s OK, then you have to wonder if she would be just as docile meeting a stranger in the home.  Even if there is a naturally protective nature that you encourage and do not train that behavior out of your dog by getting on to her when she acts that way, are you confident that she will not quietly and happily chew on a steak rather than attacking a stranger in your house?  This will most likely require training your dog, and can cost thousands of dollars.  And, even trained guard dogs fail this distraction, the most obvious of attacks.

We put together a Slideshare presentation that summarizes the shortcomings of using dogs for home security pretty succinctly.

NOW FOR SOME GOOD NEWS

Dogs are definitely a deterrent.

Some of these, I have already covered.  So, I’ll be brief.

SO, WHAT’S THE SCORE?

Of course, this is your decision.  But if I look at it objectively, I can do a lot more with my money by increasing the robustness of my home security with an alarm system and other home upgrades.  So, if I get a dog, it’s because I want to train him to hunt birds with me and not because I want a deterrent for criminals.

I’m sure some of you will disagree with me and may even have great stories of how your dog as helped you.  Feel free to share those with us in the comments below.